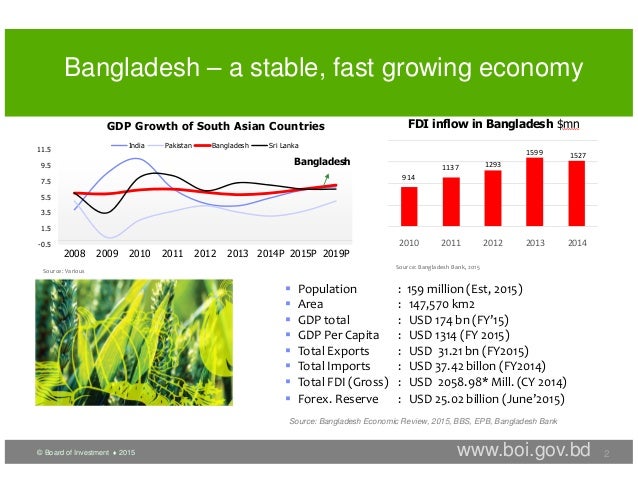 Bangladesh is now trying to establish itself as the next rising star in South Asia for foreign investment. The government has implemented a number of policy reforms designed to create a more open and competitive climate for private investment, both foreign and local.

The country has a genuinely democratic system of government and enjoys political stability seen as a sine qua non for ensuring a favorable climate for investment and sustained development.

Bangladesh has been quick to undertake major restructuring for establishing a market economy, with the major thrust coming from the private sector. The country enjoys modest but steady economic growth. Its current development strategy is based on the premise that the creation and distribution of wealth occurs through the acceleration of growth driven by competitive market forces, with the government facilitating growth and making a clean break from the practices of a controlled economy where private investment is constrained. The government has been gradually withdrawing its involvement in this industrial and infrastructure sectors and promoting private sector participation.

The government has moved speedily to translate its policy pronouncements into specific reforms. It has been consistently pursuing an open-door investment policy and playing a catalytic rather than a regulatory role.

Regulatory controls and constrains have been reduced to a minimum. The government has steadily liberalized its trade regime. Significant progress has been achieved in reducing non-tariff restrictions on trade, rationalizing tariff rates and improving export incentives. The introduction of VAT has helped rationalization of the import tariff and domestic tax structures. The tariff structure and the import policy are kept under constant review to identify areas where further improvements are called for.

Motivated by the simple realization that state-owned enterprises are a drain on its scarce resources and that these are generally inefficient, very costly and slow in responding to changing markets and consumer desires, the country has embarked on a privatization program, offering substantial opportunities for international investors.

Foreign investment is also desired in high technology products that will help import substitution or industries that will be labor as well as technology intensive.

Some of the foreign private investment opportunities are:

-direct (100%) foreign investment or joint venture investment in the Export Processing Zones (EPZs) or outside EPZs.-portfolio investment by purchasing shares in publicly listed companies through the stock exchange.-investment in infrastructure projects such as power generation (private power generation policy announced); oil, gas and mineral exploration, telecommunication, ports, roads and highways.-outright purchase or purchase of shares of state-owned enterprises, which are under process of privatization.-investment in private EPZ.

The country's drive for foreign investment is being spearheaded by the Board of Investment, which was created to facilitate the setting up of manufacturing and other industries in the private sector, both local and foreign. It is a promotional organization dedicated towards providing investment assistance to all investors.

The Board is headed by the country's Prime Minister and it includes Ministers and Secretaries from the concerned ministries as well as representatives from the private sector.The Board has launched an investment promotion drive at home and abroad to attract investors. The BOI has been assisting in the implementation of new projects as well as providing services.

In order to stimulate rapid economic growth of the country, particularly through industrialization, the government has adopted an 'Open Door Policy' to attract foreign investment to Bangladesh. The Bangladesh Export Processing Zones Authority (BEPZA) is the official organ of the government to promote, attract and facilitate foreign investment in the Export Processing Zones.

Bangladesh is on the verge of a significant breakthrough in terms both of international investor confidence and significant inflow of new investment funds.